Gaming has become a bigger industry than big-screen movies. The film industry is no longer the king of entertainment. More and more people spend time enjoying games. According to some recent statistics, the average individual spends more money on video game consoles and games for consoles than on movie tickets. This shows just how big gaming is and how much everyone enjoys them.

Even if gaming as we know it today started on PCs more than two decades ago, things have changed a bit, and now we have compact computers in the form of consoles that are dedicated to gaming. We have several big names that battle each other, attempting to dominate the console industry by providing powerful hardware that can run stunning games while still keeping the costs low. It seems that the general idea is that gaming should not be expensive like it is on PC. Consoles are affordable, and to a certain degree, they make gaming more fun.

Today we will go through 10 different console bundles that have dominated the sales charts. Some particular consoles may appear in our list as more than one but as part of different bundles. We attempted to provide a bit of diversity and included as many different options as possible. With no further ado, here are the top 10 best video game console reviews.

Even if the PlayStation 3 era has ended as the 4th generation has been released for quite some time, the old console is still a great option in terms of gaming. PS3 games are still being released, and it is easy to understand why. Game developers still have staff that has vast experience in building games for the PS3.

This particular bundle is actually a special edition of the console. It is a slim version painted in white. The model comes with a 500 GB hard drive which should be enough, and a controller. Basically, it is the standard version but in white.

The Xbox 360 500 GB Call of Duty bundle is a great option since it comes with two games, the controller and the slim version of the console. It offers a great deal for a rather attractive price tag.

Just like with the PS3, the Xbox 360 is still a great console, even if the Xbox One has been around for quite some time. Games are still being developed for the 360. Pretty much every developer comes with a version of their game for the old-generation consoles when they release a new title. The good news is that there is no hint of this practice stopping any time soon.

The reason the PS3 12 GB edition gets a better spot in our list is the price. Even if its storage is limited to 12 GB, it can be extended with a hard drive upgrade which is easy to do and does not require much expertise.

The bundle includes the standard black PS3 and a controller. It does not have any bonus games included but getting a PlayStation Plus subscription is actually a great way of free games. The console bundle is a great pick for those ones that never owned one and do not want to spend to much money.

Portable gaming consoles changed a lot, and this is mainly due to the hardware used. The hardware is now more energy efficient, much more powerful, and smaller at the same time. Nintendo was able to pack powerful hardware in the 3DS XL. It offers superior graphics and a larger screen while still maintaining a decent life on a full charge.

The bundle includes the console itself and just the AC adapter. It does not have free games included as it is the most inexpensive version. It is worth mentioning that the console has Bluetooth support and can play games older games that were made for the previous generation. 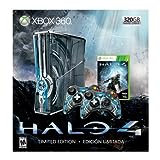 The Xbox 360 Limited Edition Halo 4 Bundle is more of a collector’s item. It is an excellent pick for any Halo fan that comes with a custom skin for the console and two special edition controllers. It is significantly more expensive due to its rarity, but surely there are plenty that would love it as a vanity item.

The full bundle includes a bonus DLC pass that allows the user to get additional in-game perks and skins. It also includes bonus missions that usually need to be purchased separately.

The original Nintendo Wii console is still a great option for the ones that are looking for something more casual. Most of the games for the Wii are designed to be fun and enjoyable for both adults and children

There are some concerns that the console might be replaced by a new generation, but so far, Nintendo did not announce any plans for a new Wii model with refreshed hardware. For what is worth, the bundle is still a great purchase, and the game selection is literally huge. 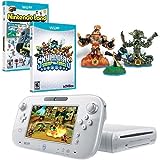 Nintendo Skylanders SWAP Force bundle is a great option for the fans of the console and the game. Skylanders now has a huge following, and it is one of the most loved Wii U games by both adults and youngsters.

The bundle includes the Wii U console and the game. As a bonus, it also includes 3 trading cards, stickers, 3 character figures, and a large poster. Overall, for the money, it is difficult to get a better Nintendo Wii U bundle.

Sony PlayStation 4 managed to become one of the most dominant consoles due to the number of titles developed for it. It is also packed with features that enhance the gaming experience and support streaming and sharing.

This particular bundle is actually the basic version. It is a 500 GB PS4 that comes with one controller. In terms of pricing, it is actually the most affordable version that one could get, as bundles that include games are usually more expensive.

Xbox One closely follows the PS4 in terms of popularity. Their biggest asset has been the Halo series that helped promote the console when it was released. The Halo 5: Guardians bundle is a great pick for the fans of the series, especially the ones that played the previous games.

The bundle includes a special version of the console that comes with a custom Halo 5-themed skin and a gray controller. It has a 1 TB hard drive which should be enough even for a hardcore gamer.

The PlayStation 4 Call of Duty bundle has almost the same price as the standard bundle, which does not include any game. This makes it a great pick for the ones that have the money just for the PS4.

As stated by the title, the bundle includes a standard black 500 GB PS4, one controller, and the game itself. The game comes in a physical disk form and not as a download code. As a bonus, Sony included bonus multiplayer maps with this bundle.

There are several different gaming consoles, and it seems that people choose one based on the exclusive games they have. For example, a Halo fan will never go for a PS4. On rare occasions, someone would actually look at the features and hardware specs and go for the console that seems more reasonable.

Regardless of the reasons some might have to go for a particular console, we decided to include as many different models as possible while still selecting the best bundles that offer a great deal for the money. Some of the items in our list are considered vanity edition consoles and even those are still worth looking into.